Kent - The Garden of England

The English county of Kent, one of England's 'home counties' (as the counties that surround London are referred to) and is best known as The Garden of England, and with good reason. Although other regions have tried to lay claim to the title, Kent with its abundance of fruit orchards and fresh produce defended its title in 2006, when a survey of beautiful counties put Kent in fifth place, behind North Yorkshire, Devon, Derbyshire and Gloucestershire. 28% of the county forms part of two Areas of Outstanding Natural Beauty - the North Downs and the Weald.

Bordering East Sussex, Kent has many hop gardens, and distinctive hop-drying buildings called oasts are common in the countryside; although many have been converted into dwellings. Nearer to London, market gardens also flourish.

Hills in the form of the North Downs and the Greensand Ridge span the length of the county and in the series of valleys in between and to the south are most of the county's 26 Castles.

Kent is England's oldest county and contains more castles and historic houses than any other region. You're spoilt for choice - some of the most popular are Leeds castle, without a doubt one of the most beautiful venues in Kent and surrounded by 500 acres of parkland and gardens. Dover Castle offers the opportunity to immerse yourself in court life with an innovative tour, and you can also head underground to explore the darkly atmospheric Secret Wartime tunnels that bury deep into the iconic cliffs.

Canterbury is the jewel in Kent's crown. Buzzing with a youthful vibe thanks to the universities, Canterbury also excels at the historic too. Parts of the magnificent Canterbury Cathedral date back to the 11th century. Archbishop Thomas Becket was murdered there in 1170, one of medieval Europe's great places of pilgrimage and knowledge.  Alongside this, it is the seat of the Archbishop of Canterbury, leader of the Church of England.

But there's more to Kent than history - with 350 glorious miles of coastline, breathe in the salt air and take in the views. On a clear day France can be seen from Folkestone and the White Cliffs of Dover, immortalised in the World War II song by Vera Lynn. (A little known fact - the 'bluebirds' referred to in the song refers to the RAF fighter pilots in their blue uniforms, and was written to lift the spirits of the allies following the Battle of Britain over the White Cliffs of Dover).

If all that sightseeing and salt air has whet your appetite, then the Kent can amply provide. With vineyards and breweries Kent produces world class wine, tangy cider and many varieties of locally-brewed beer to sample. The apple, pear and cherry orchards provide delicious soft-fruit jams, and there's always super fresh fish from the miles of coastline. Just along the coast you can find the justly-famous Whitstable Oysters and Romney Salt Marsh produces the finest lamb renowned for its tender texture and taste.

Flackley Ash Hotel is ideally situated on the Sussex/Kent borders, and our chefs make full use of the abundant produce from just across the 'border' in Kent - come and see, taste and experience this beautiful county for yourself! 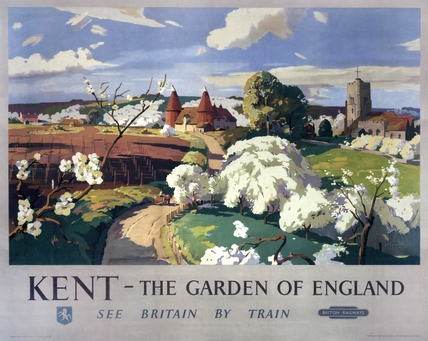